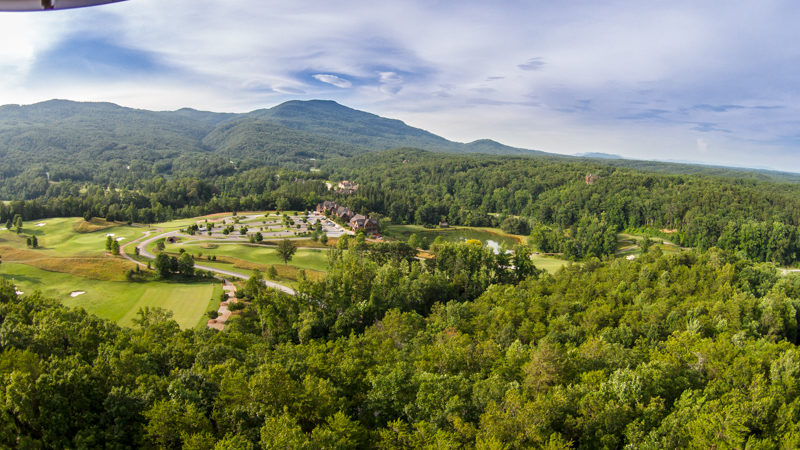 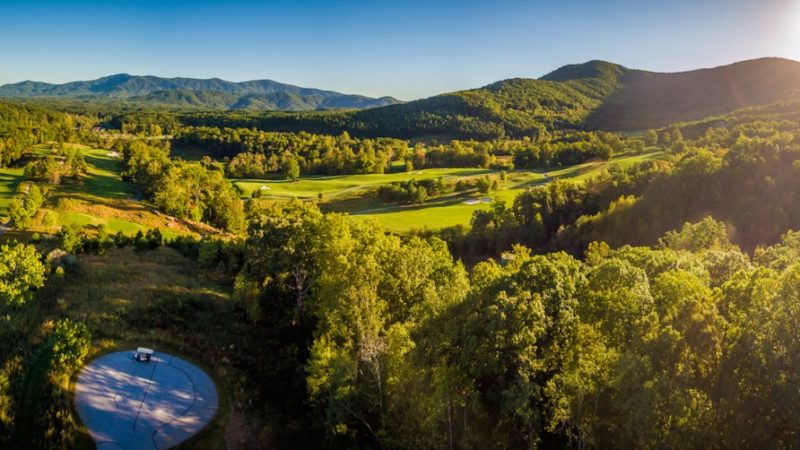 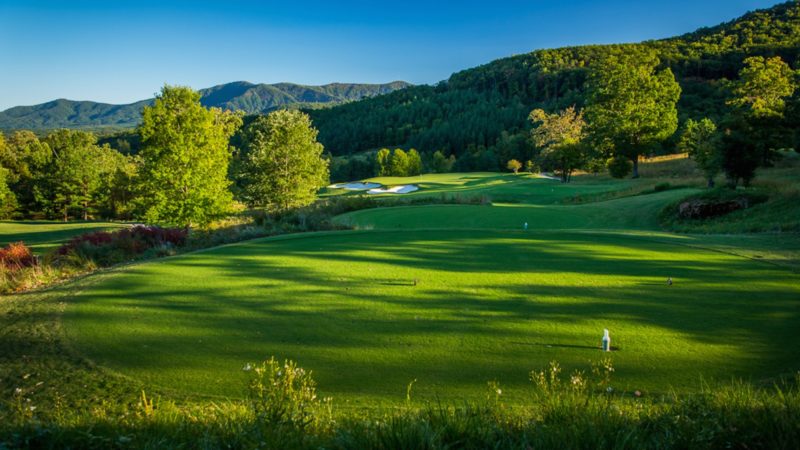 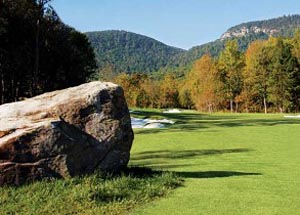 A drawn tee shot will follow the angled right to left fairway and avoid the creek on the left. Two bunkers through the fairway could save an errant ball from an even worse fate. Climbing up the fairway from the landing area, a bunker-protected green opens up to approach shots on the left the further you advance past the second landing area. Only one easy pin sets in a bowl of this two tiered green. 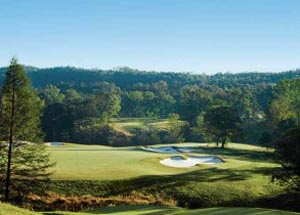 This hole plays over a deep gorge to a fairway on the far side. It doglegs right downhill to a green, unseen from the tee. A shot to the center or a carry of 290 over the right bunker will launch the tee shot toward the green for a short iron in and will make for the best approach by opening a slot between the tree and greenside bunker. This will help avoid the drop off behind the green. 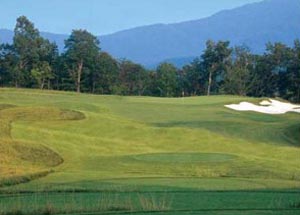 The space around the horizon green on this ridge top par three looks rather generous with abundant space to the short and left of the green. However the right and back are absolutely treacherous. A long and deep bunker guards the right side of the green and protects balls from the precipitous slope below. Any bit of wind will affect shots much more than on the previous holes. 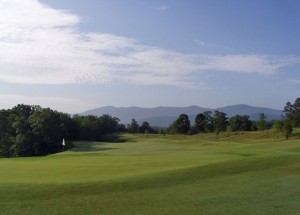 Running along the side of a ridge, this par four lays itself out plainly from the tee. Playing a shot close to a steep slope off to the right allows the player to approach the proper quadrant of the pin. The play toward the left fairway bunker at 300 yards, offers the easiest access to the green, safety from the edge but, precision distance control is needed to hit it close. 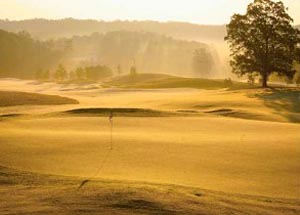 This reachable par 5 plays decidedly uphill to a shallow, 2 tiered green. The safe play is a lay up left, leaving a short iron to the greens proper level. Longer players can challenge the heavily front guarded green in two, but there is no easy up and down from these deep bunkers or green surrounds. 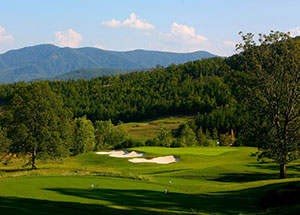 This long downhill par three distracts with views of the valley and the surrounding mountains. Approach shots will release into the green from the right. You will also need to feed your ball into left side pins from the middle of the green as bunkers protect the left side. Long is wrong as it plays a good club shorter down to this green. 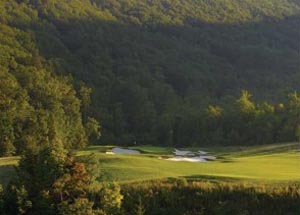 The deep gorge this hole plays over contains the remnants of an old stagecoach road which climbed through the mountains. Back dropped by a giant hillside, there is a wide fairway which narrows as it turns left with a bunker straight away at 300. Carrying the bunker left will give great advantage toward attacking the plateau green protected by bunkers with a short iron that lessens the chance of steep slope left affecting the approach. 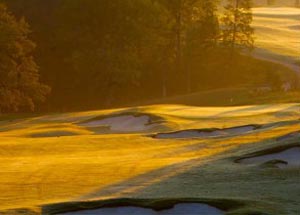 The slight dogleg right is just enough to feel obligated to play close to the bunker on the right. An offline shot on the left side of the fairway can run though, finding the ball in the large left side bunker. From here you will find yourself blocked by another bunker at the green. You will find many balls near the back of the green as it is unnoticeably downhill. 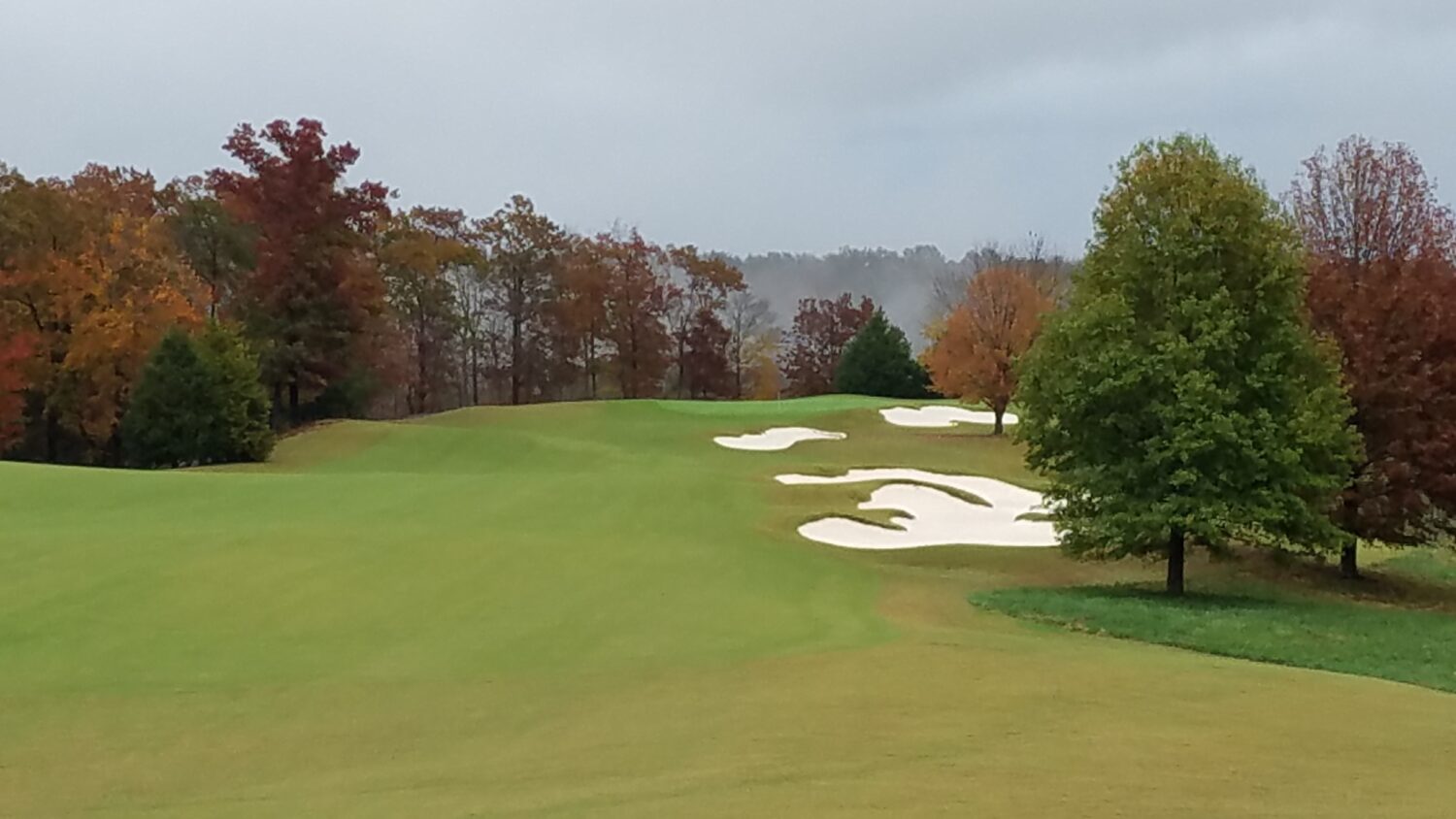 This long par four plays down to a fairway along the narrow spine of a ridge. Steep slopes fall away on both sides just off the fairway although there is plenty of space to play. The second shot plays uphill to a green on the horizon. A right-side bunker guards the tougher pin locations long and right. 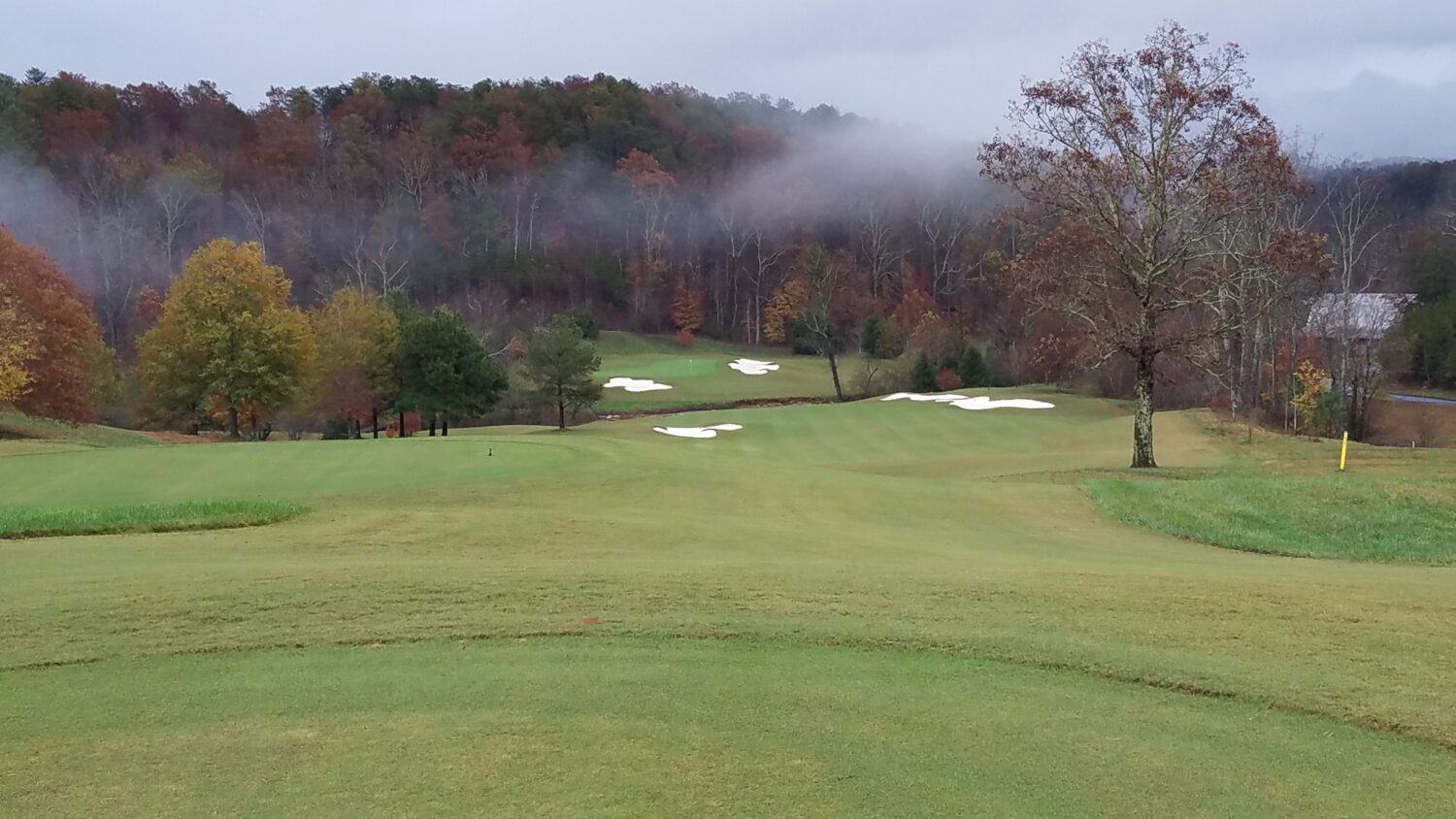 The strong downhill tee shot significantly shortens the hole enough to consider 3, 4 or 5 wood to remain out of the bunkers on the right as you would need to cross Brights Creek to get to the green. Front left and right side bunkers protect most pin locations and a shot over the middle half of the green will find itself near the back edge. Something landing left of the green will be playing on a steep grassy slope with a very tricky downhill shot back. 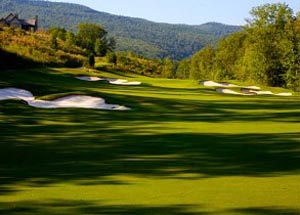 This short par four plays back across Brights Creek. Playing between the two fairway flanking bunkers is not necessary but it shortens the approach shot substantially. The greens false front and undulating contours offer many challenging pins. Better not play left just because the bunkers are protecting the front and a steep slope falls away to the right. 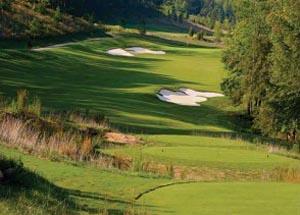 This medium length par four plays upstream in a tight valley with Brights Creek to the right. The narrow fairway is benched atop the steep slopes of the noisy creek below with a bunker shelved in-between at 270-285. Steep slopes rise off the left of the fairway ensuring rather sloped grassy lies. The green has strong false front with a bunker short left and wide right while the uphill shot to the green makes it tough to pinpoint the distance. 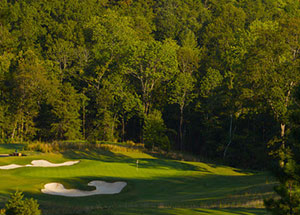 This downhill par 3 plays significantly shorter than the yardage indicates and is a breather hole in the middle of the back side. Pinpoint precision is required when the hole is located on the left side of this nearly 100 foot wide green. 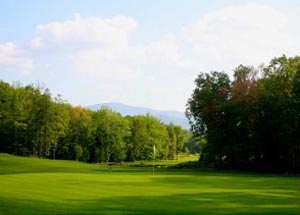 This double dogleg, uphill par five plays over Brights Creek and requires well placed shots on the edges to reach the green in two. Ideally, a tee shot will find the right side of the fairway. Landing in the bunkers on the left will leave a difficult shot across the creek and lengthen the third shot. The right side of the landing area offers a better view of the green. The undulating green is benched into a hillside with a steep-faced bunker to the left that guards the fade away slope deep into the green. 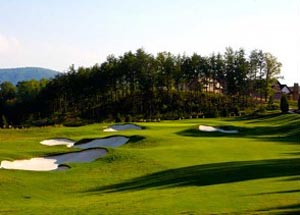 Turning south to play across a small meadow, this hole offers a wide panorama of the southern mountains. Risking a shot near the left side bunkers opens the best angle for the green to accept the approach shot. Even then a running approach shot has to pass a narrow gauntlet between two gaping bunkers. 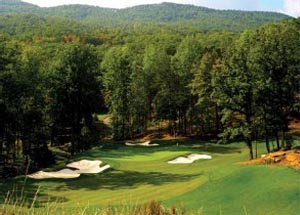 Sitting at the base of a mountain ridge, the fifty plus foot drop of this par three makes it play much shorter than its 194 yard card length. The green perches atop a large retaining wall with a small stream on the left. Bunkers front and back accent the green. Another small bunker punctuates the sealed bailout on the right. 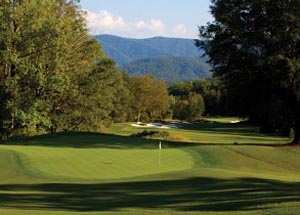 Playing downhill greatly shortens this par four. Although large tree on the left edge of the fairway can be easily carried, it greatly narrows the landing area denying quite a few yards from shots low and left. You may want to consider a 3 wood for this tee shot. Another large oak frames the back of the green that opens up on the right. Strong slopes to the left accompanied by a bunker on the front and much of the surface naturally sloping toward the back adds to the difficulty of the green. 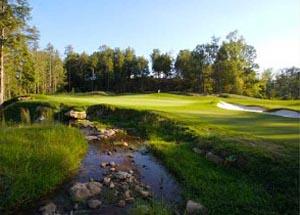 A creek meanders down the right of the tee shot, crosses over to the left through the green. Playing close to the left side bunkers allows the player to use the slopes to find the fairway away from the creek. The longer the lay-up the more the fairway narrows as the player works into shorter wedge ranges, again, with the creek looming. The two tiered green perches on a rocky slope above the creek demanding precision to lie within range for a single putt. 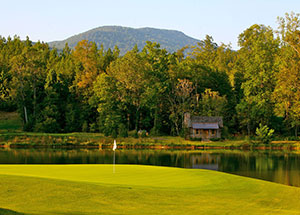 The “Hog Hole” is a scenic, fun par 3 that can be played from two unique tee boxes that must carry the large pond and range in length from about 80 yards to 200 yards. Its called the Hog Hole to give players a chance to even their bets before heading in to the clubhouse.